The house is on fire: the multi-faceted problem of climate change

An area the size of Belgium is burning in the Arctic

Not a day goes by without the news reminding us that we’re facing an environmental emergency in the form of climate change. The evidence is overwhelming: human activity is driving over a million species to extinction, many of which will occur within decades if things continue as they are. By 2050, it is estimated that 140 million people (from Ethiopia, Bangladesh and Mexico, for instance) could become climate migrants if we don’t take action very soon. On a more optimistic note, many are responding to the urgency of the situation and we are seeing an increase in the number of people who want to make a change. You just have to look at the thousands who took to the streets this year to join climate activist movements such as FridaysForFuture and Extinction Rebellion to see the growing public awareness of the issue. So, what exactly is the fundamental problem at hand when it comes to climate change, and how can entrepreneurs and other individuals do more to make progress in this area?

The key issue is that human activities are causing a greenhouse effect, which in turn is leading to a rise in global temperatures. At first, one might not think that a slight change in temperature is a big deal, but the global impact of such a change should not be underestimated. Should the average global temperature rise more than 1.5 °C above pre-industrial levels, massive habitat loss will take place and food security will be heavily jeopardised: crop yields will be lower, and CO2-dependent crops will have lower nutritional value. Even if we manage to keep temperatures below the set threshold in the Paris agreement (2 °C), the earth will be and is already being confronted with grand challenges. An example: the recent forest fires in the Arctic region that are larger than usual, covering an area bigger than Belgium. Some scientists even claim our actions are having such a profound effect on the earth that we can call our current geological age the ‘Anthropocene’: the time in which mankind has become a geophysical force. 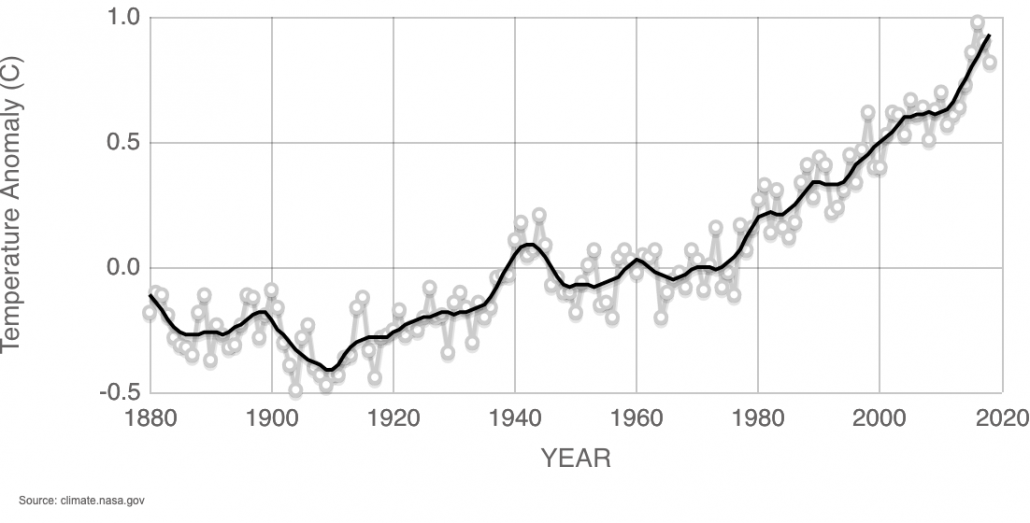 Global temperature rises from 1880 until now

Fossil fuels, livestock animals and airplanes have a big impact

The aforementioned greenhouse effect is essential for the functioning of the planet. When the sun shines onto the earth, it’s energy is either reflected back into space or absorbed by land, ocean and atmosphere. There, greenhouse gases (GHGs) such as carbon dioxide and methane prevent heat from escaping back into space, to ensure warmth and life on earth. However, the mass population growth that started in the post-industrialization-era is causing increased amounts of GHGs to be emitted. This, in turn, is disrupting the delicate balance of GHGs in the atmosphere, causing too much heat to be trapped.

Three major emitters of GHGs are:

In the energy sector, GHGs are emitted during the production of power, electricity and heat when fossil fuels are burned. In the European Union alone, for example, energy production and consumption are estimated to account for 80% of total GHG emissions. As populations and economies grow, their energy demand rises with them. Therefore, it is somewhat unsurprising that current-day, more established economies have historically caused a lot of our environmental problems and to this day still have the highest rates of per capita GHG emissions. Although they are gradually starting to think about moving away from burning fossil fuels, economies that are on the rise still need to meet their growing energy demand. This is often only possible through burning fossil fuels, as employing renewable energy sources inevitably requires high investments.

As for animal agriculture, it is estimated that livestock accounts for between 14.5% and 51% of all anthropogenic GHG emissions per year, worldwide. Eating animals like cows and sheep and their secretions (e.g. milk) has a significantly higher climate footprint per 50 grams of protein consumed when compared to the equivalent amount of protein consumed via eating plant-based food. This is due to the fact that firstly, high amounts of (mainly rainforest) land are cleared for livestock grazing and that in addition, many of the animals we keep are ruminants. While deforestation lowers the planet’s ability to absorb CO2, ruminant animals emit gases, thereby causing GHGs to enter the atmosphere. Around 83% of the world’s farmland is used for meat, aquaculture, eggs and dairy. While that yields only 37% of the protein and 18% of the calories we consume, it contributes to between 56% and 58% of food’s different emissions.

Lastly, the transportation sector is also responsible for a significant amount of emissions. For instance: in 2017, roughly 29% of the United States’ anthropogenic emissions came from maritime transport, cars, trucks, and aviation. The main drivers of GHG emissions in this sector are activity (passenger kilometres per year or freight tonne kilometres per year), infrastructure, energy intensity of vehicles and their engines, the carbon intensity of the fuel that is used and behavioural choice between transport modes (e.g. do people opt for the relatively high speed of air travel, or the relatively low cost of train travel?).

Estimations of how much each sector is responsible for vary widely, not least because countries often don’t have the resources or infrastructure to apply the most accurate mapping methods required for such calculations. Moreover, the Global Warming Potential (GWP) of GHGs like methane is often misinterpreted, making it even harder to provide an exact overview. 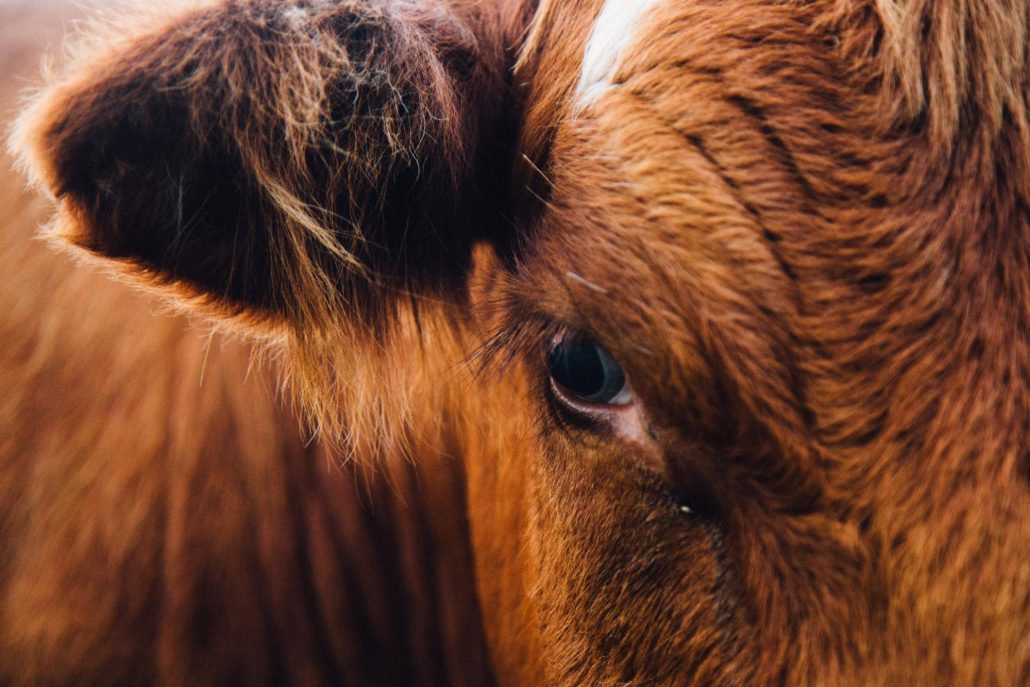 Photo by Antonio Grosz on Unsplash

Global warming affects us all, but the most vulnerable are hit first

Now we know some of the causes, what are the implications of climate change on our daily lives? The planet getting hotter influences many aspects of our lives and the earth, with the main areas being the oceans, the weather, food, health and social justice. 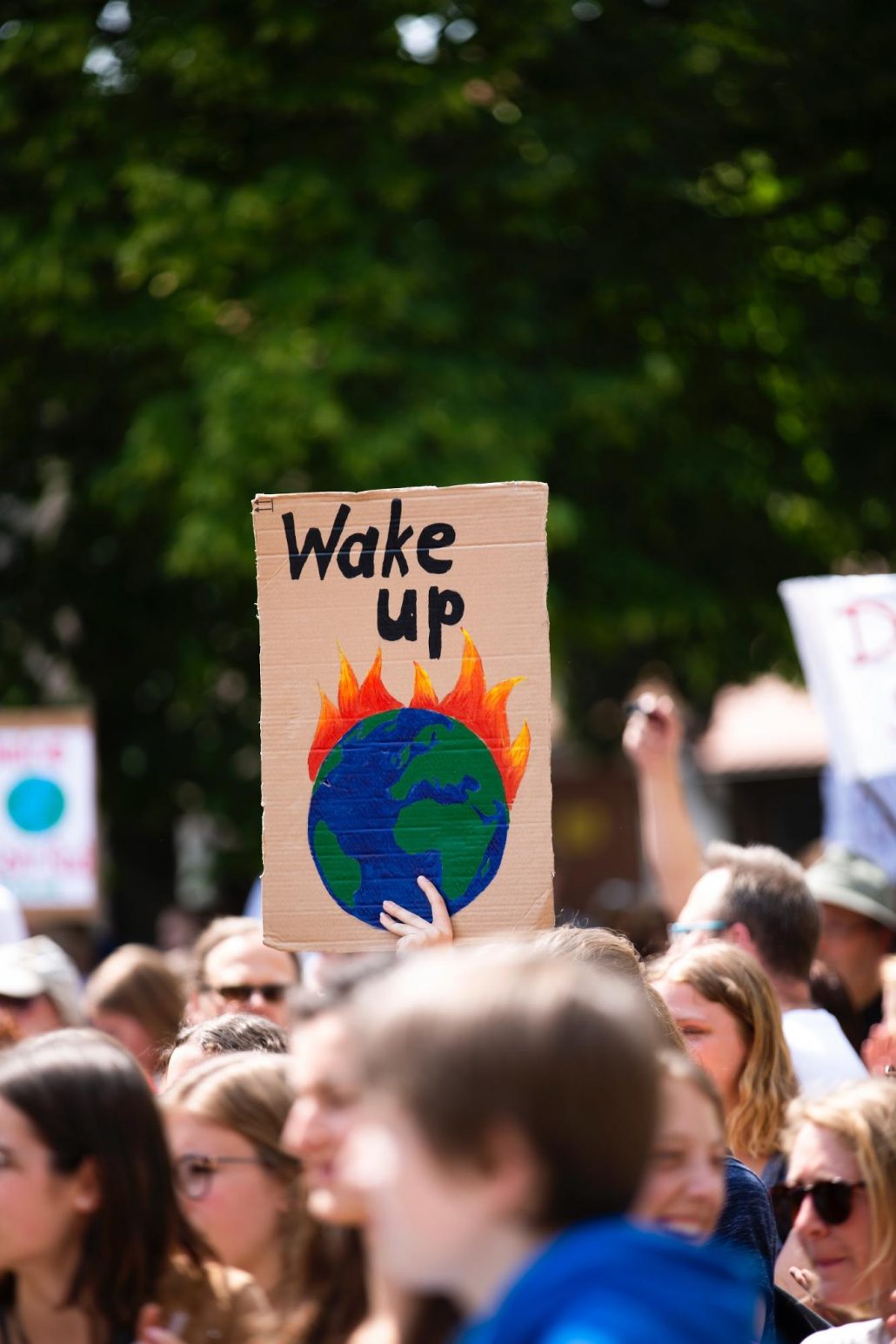 As the greenhouse effect is enhanced, the earth’s delicate climate balance is disrupted and global temperatures are rising, with the energy sector, animal agriculture and the transport sector proving to be three of the largest contributors to this change. The implications are vast and barely comprehensible: as global warming progresses, our oceans, weather, food security and health are all jeopardised. Furthermore, since its effects target the poorest of the world first, global warming may even be seen as a social justice issue.

Though the outlook seems unencouraging, there are solutions! Keep an eye out for our next blog post, where we’ll dive into solutions and opportunities that arise with a changing climate.

Why half a degree increase is a big deal

Causes and Effects of Climate Change

This article tackles the following SDGs: