Members of Impact Hub Bergen hit the shores of Bergen to counter pollution and to educate themselves and others about the environmental crisis.

“Our vision is that one day, we can walk down to the sea and find clean beaches. We aim to do that by cleaning up and also by ‘closing the tap’ – preventing plastic pollution at source.” 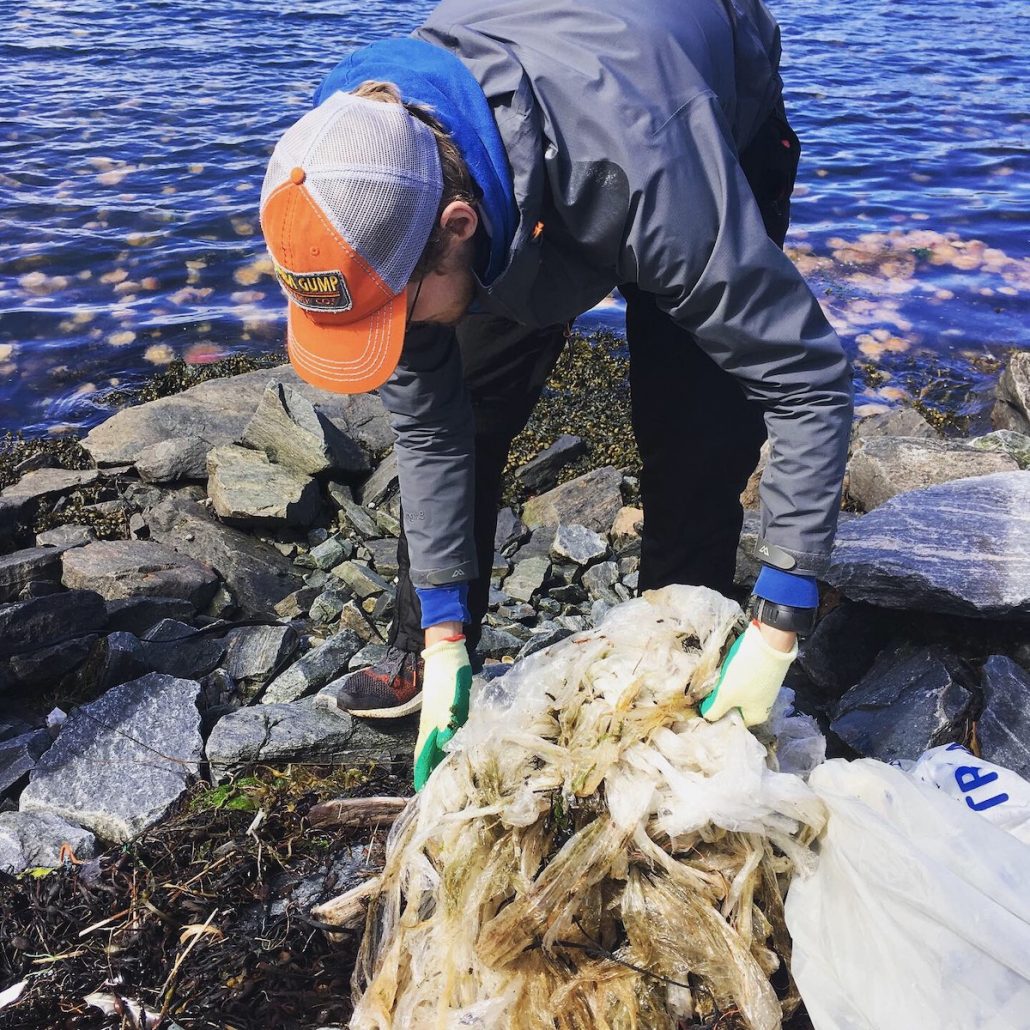 An Impact Hub Bergen member cleans plastic waste from an island beach off the coast of Bergen.

When picturing Norway, you might think of pristine nature and crystal clear waters, not fjords and beaches littered with plastic. But even a country with a reputation for recycling and environmental responsibility has its own fair share of problems with plastic.

There is a small island off the coast of Bergen named Litla Lyngøyna, nicknamed “skrekkøya” (“isle of fright”) by local media, due to the shocking amount of plastic litter found washed up on its shores. The discovery of the polluted island sparked a five-year research project with NORCE, the University of Bergen and help from the organization fighting pollution on beaches, Clean Shores, to understand the effects of this plastic buildup on microorganisms and wildlife on the island.

“You have plastic at the bottom [of Litla Lyngøyna] from the ‘50s and ‘60s, you can tell from the labels” remarks Rune Gaasø from Clean Shores. One of Rune’s strategies to fight marine pollution is to hold policy makers accountable for their waste, “Now and again I send a few plastic bottles [that he finds on the Norwegian coastline] to the Rural & Environmental Minister of Scotland, just to remind her that we’re following her progress on implementing a deposit-return system”.

Clean Shores was founded in Stavanger in 2016 during an innovation camp with local communities who decided to form an NGO to address marine pollution. Currently, they have groups in approximately 50 Norwegian communities and another 10 groups internationally, particularly in East Africa. 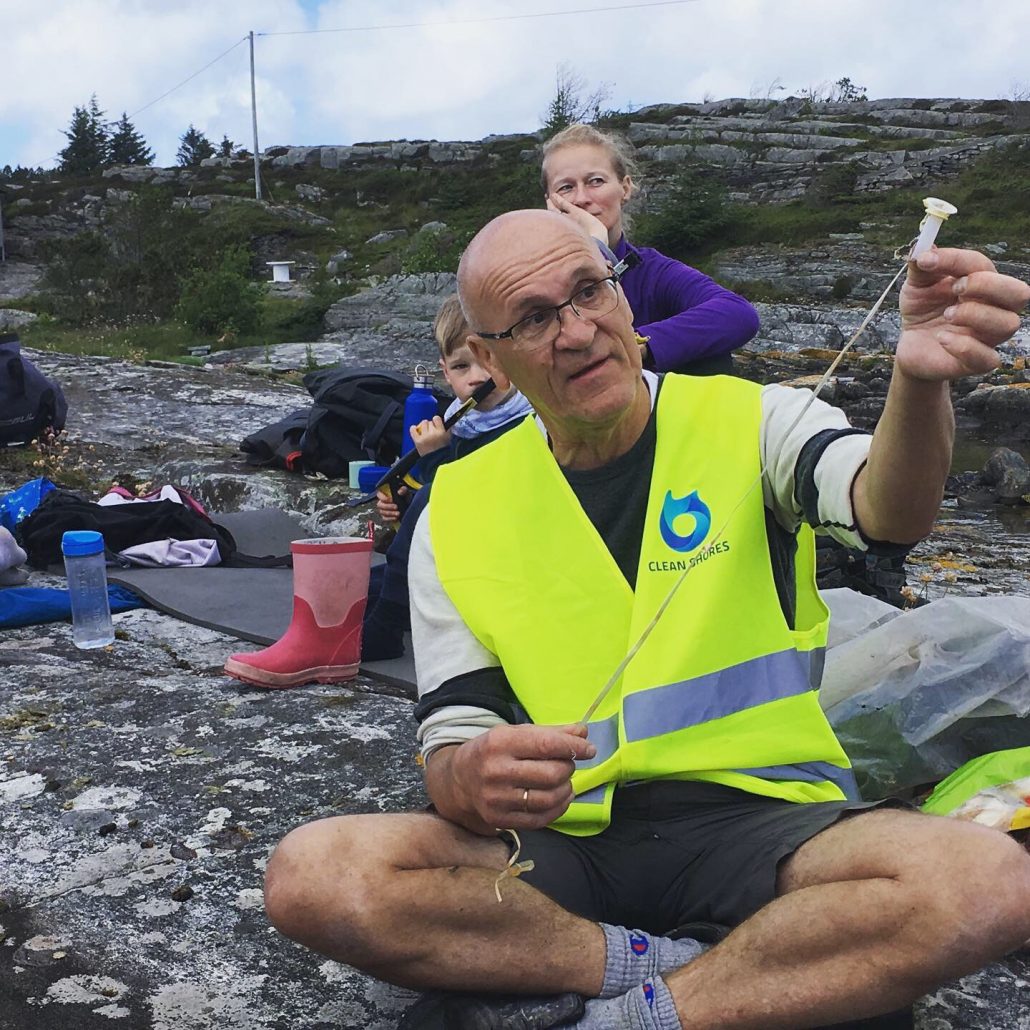 Rune Gaasø of Clean Shores Bergen with plastic litter from a helium balloon found on a beach.

Rune Gaasø, one of the founding members of Clean Shores Global, runs the local chapter in Bergen. He joined Impact Hub Bergen in early 2019. It has been a good year for Clean Shores, who received their first government grants this year. Previously, they financed all of their activities themselves.

Clean Shores is not your typical member non-profit. It is run entirely by volunteers and funded by its collaborative partners. “Our main goal is to get the beach clean rather than building a huge organization with memberships”, explains Rune. Around 67% of the Norwegian population take part in voluntary work, in more than 100.000 organizations. This creates a lot of value, estimated at approximately 2.100 USD per capita in a study from 2015.

Rune is a volunteer himself, “I am retired and receive a good pension from Equinor, so I am using that to do good in society.” Now Rune is using his experience in technology, operations, business development and procurement to combat marine pollution and contribute to environmental issues.

In 2018 Clean Shores organized approximately 400 beach cleans and plan to double that number in 2019. As a part of their growth strategy, they support municipalities in setting up their own local Clean Shores group by providing them with a set guidelines and then giving them autonomy.

They assisted Bergen City Council in establishing Norway’s first municipal plan against marine pollution, which was approved in June 2018. The plan has been very successful and is now used as a reference in other communities, including Oslo, Tromsø and Stavanger. They are now joining forces on an ambitious project to map out pollution levels, potential sources and collaborators along Bergen’s 308km of shoreline.

Closing the tap on plastic

“Our vision is that one day, we can walk down to the sea and find clean beaches,” Rune explains, “we aim to do that by cleaning up and also by ‘closing the tap’ – preventing plastic pollution at source.”

Clean Shores collaborate with the corporate sector in order to ‘close the tap’ on plastic pollution. Together with Bergen Chamber of Commerce, they are involved in the project #plastsmart, which aims to help businesses identify ways to reduce their waste streams – from their coffee machine to their supply chain and production flows.

Collaborations with the oil and maritime industry take the issue back to its source. Clean Shores have teamed up with Friends of the Earth, PSW Group and other international stakeholders in the marine and energy sector to deal with large, floating industrial objects that are stranded on the shores, such as flotation modules that can weigh up to 800kg each.

With the help of Netlife, they have created a clean-up portal featuring a button labelled “big, heavy objects”, where beach cleaners can geotag and send a picture of objects that are too large to carry. Clean Shores receives a report, organizes the recovery and tries to repair them and put them back in use.

In 2017, when a goose-beaked whale died from ingesting 30 plastic bags on the shores of an island off the coast of Bergen, Clean Shores organized The Plastic Whale Heritage event for 22 Environmental NGOs. As a remembrance of this tragic event, hundreds of participants representing 14 nations, joined together for a beach clean-up and conference in 2018. The event will be held again in 2020 in collaboration with other local organizations.

Clean Shores is also collaborating with Impact Hub Bergen in organizing Beach Cleans for their members. The first event was in June, where 12 representatives of Impact Hub Bergen cleaned the shores of Øygaarden, picking up approximately a quarter of a ton of waste. While the members were cleaning, Rune and his volunteers from Clean Shores dove for fresh shellfish, kelp and other sea edibles which were sampled in a BBQ. This will be the first of a series of cleans organized between Impact Hub Bergen and Clean Shores and all members and their families are welcome. Please follow our Facebook page and our website for upcoming events and to get involved! 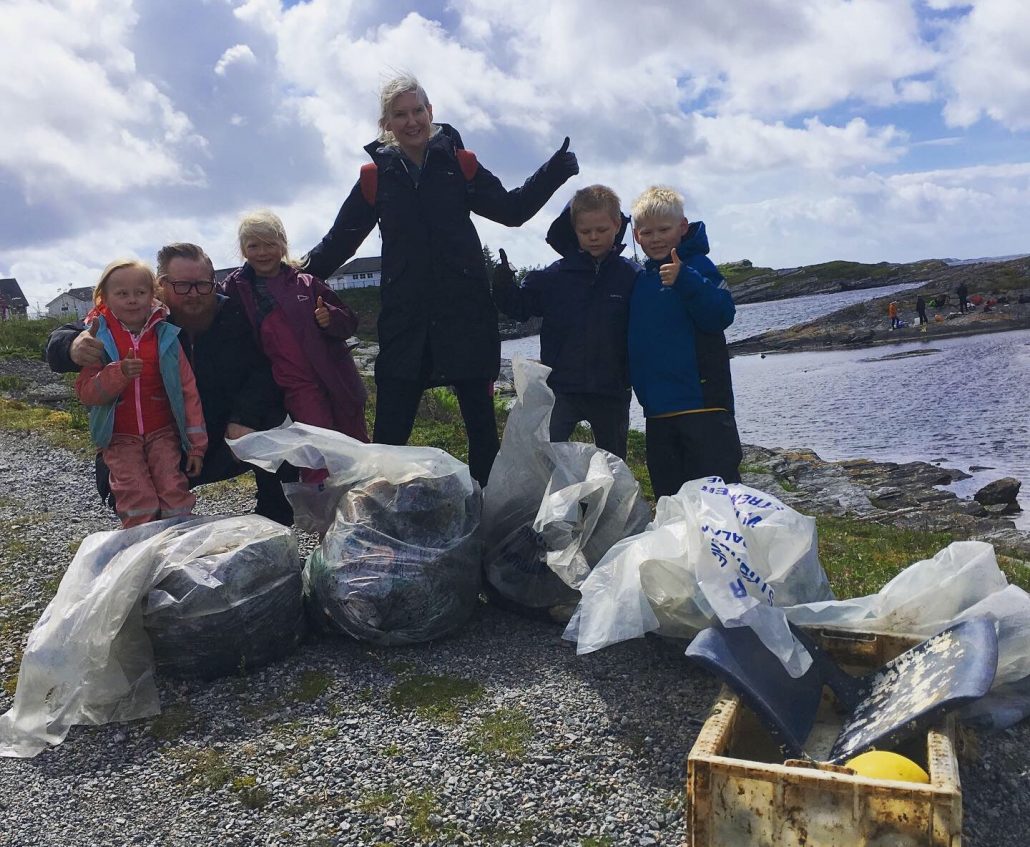 An Impact Hub Bergen member and her family with the waste they cleaned from a small section of the beach.